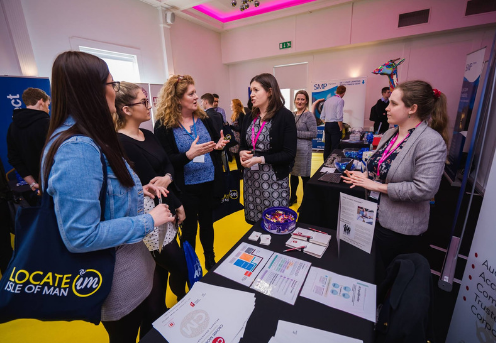 The first Isle of Man Graduate Fair, hosted by the Department for Enterprise, saw a large number of young professionals attend Woodbourne House in Douglas this Wednesday, 17th April.

The free conference, which intended to inspire and inform Manx-educated students on the wealth of opportunities available in the Island’s economy, attracted more than 200 attendees  – including graduates, undergraduates and representatives from some of the Island’s leading organisations, and provided a unique opportunity to allow graduates to plan their return to the Island in the future.

‘The promotion of career opportunities in the Isle of Man is a key theme in the Locate Isle of Man strategy, and this dynamic and energetic event really brought to life the sheer number of current job vacancies suitable for graduates in our international business centre.’

‘Recent statistics have demonstrated that there are excellent prospects for career progression, particularly in the early stages of your career, with 1 in 3 of our young workforce aged 18 -29 benefitting from promotion or progression in the past 12 months. By showcasing the variety and breadth of organisations who call the Isle of Man ‘home’, we have delivered tangible opportunities for our young people.’

The event included keynote speakers from the local economy who shared some wonderfully open, diverse and interesting stories from their careers so far. Speakers included; Jeriel Bacani, Creative Content Lead at Microgaming, Jamie Lewis of Peggy + Lewis and Guy Wood, an ex-professional sportsman who relocated back to the Island to found Ascentiom recruitment agency.

A panel session, hosted by Love Tech - a not-for-profit organisation run by a group of female businesswomen and technologists, took an interesting look at job opportunities in STEM (Science, Technology, Engineering, and Mathematics), and there were also interactive workshops from some of the Island’s recruitment agencies which offered tips and useful advice for anyone embarking in the first steps of their career.

A busy day of networking was rounded off with an informal panel session co-hosted by Isle of Man Business Network at Barclay’s Eagle Labs.

Minister Skelly MHK thanked attendees for their support of a new initiative:

‘I’d like to thank everyone for attending the first Isle of Man Graduate Fair, and we hope that its success will lead to more of these events and to greater communication with our Manx diaspora and students on the prospects that awaits them ‘on their doorstep’ – whether working for one of our businesses, or even considering running their own through our Enterprise Support schemes’

Paragon Recruitment Agency commented on the high standard of candidates in attendance:

‘We were delighted to run our stand throughout the day and to provide a dedicated 1-1 advisory session for delegates within the Recruitment Zone, which had sold out well in advance of the Graduate Fair.’

‘The organisation, promotion and management by the Locate team made this event an absolute pleasure to partner and support; the actual day itself, the buzz and the pure number and calibre of individuals we spoke with demonstrated the real need for this type of event, and many graduates commented on the surprising availability of career options and employers in the Isle of Man they hadn’t realised existed.’

Gary Proctor, Managing Director of Excel Group, who exhibited at the event, said

‘As the first graduate fair that we have attended, we were impressed with the initiative, the format and the organisation. From speaking with the graduates attending it is clear that there is a desire from some to move back to the island following their degrees, the fair helps them to identify the opportunities available and puts them in touch with employers such as ourselves who see graduates as a way, with appropriate further training and coaching, of filling the management and technical vacancies that we have.’

For more information on Locate Isle of Man, and to search current job vacancies visit www.locate.im