Public Record Office is a hit with heritage visitors 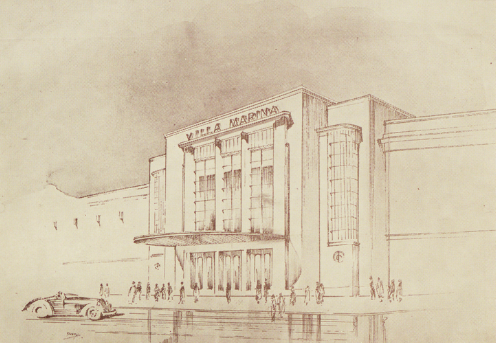 The history of the Villa Marina was under the spotlight at the Isle of Man Public Record Office’s special heritage event last month.

An exhibition telling the story of the Douglas landmark was the centrepiece of four ‘Heritage Open Days’ events held last month at the Island’s Public Record Office.

The Heritage Open Day weekends, co-ordinated by Manx National Heritage, gave people the chance to explore the Island’s rich history and culture through a packed programme of events located across the Island.

This was the fourth consecutive year of participation for the Public Record Office, which is the official archive of the Island’s public bodies, including Government, Tynwald, Courts and local authorities.

While this was far from the only opportunity to visit the Record Office (it is open to the public on Thursdays and Fridays), Heritage Open Days attendees had the added bonus of a tour of the main archive storage facility, which houses an incredible variety of records ranging in date from the 18th Century to the present day.

During the tour, they also saw a selection of hand-picked items of interest, and heard about the valuable work being carried out to protect and preserve significant records for future generations.

Following the tour, visitors were able to enjoy the Villa Marina exhibition, curated by the Record Office team, which captured the history and many guises of the Villa Marina; from its beginnings as a private mansion, through its time as a boarding school and a hotel, up to the point it became the Villa Marina and Gardens.  Archival material also included beautiful hand-drawn entries to an architectural competition which was launched in 1911 when Douglas Corporation looked to redevelop the site.

'We were delighted to be part of the Heritage Open Days once again. As in previous years, attendance was strong and we received great feedback from visitors. It’s always heartening to see such positive engagement with our shared history.

We’re already looking forward to planning further outreach events. In the meantime, as ever, we encourage anyone with an enquiry - whether it’s family history, formal research or general interest – to get in touch, as we’re always here to help.'

For more information about the Public Record Office, visit https://www.gov.im/pro

The Public Record Office is open to the public on:

Pictured: Artist Dusty Miller’s impression of the Art Deco style frontage that was proposed for the Villa in the late 1930s. This was published in the 1939 Isle of Man Yearbook, a copy of which is available in the Public Record Office’s local studies library.