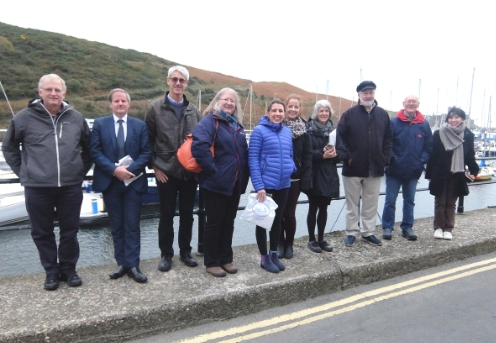 The meeting, a first of its kind, was led by Minister Laurence Skelly MHK, Sue Kidd (ISMF Secretariat) and Roger Pullin (ISC Secretary) and included presentations on the ISC and ISMF and discussions on how both organisations will work collaboratively to sustain and conserve the Irish Sea. The day also included the Steering Group of the ISMF holding a teleconference with its members across the UK and the Republic of Ireland.

The ISC will participate and make a presentation to the upcoming biennial conference of the ISMF in Cardiff in January 2019 and the next conference in this series will be held on the Island in 2020.

‘The results of the meeting were very positive; and as a result the ISC and the ISMF will explore further mechanisms for working together with other organisations on the Island and across the Irish Sea.

The Irish Sea ecosystem encompasses coastal lands and waters of the United Kingdom, the Republic of Ireland and the Isle of Man and provides vital ecological goods and services to many sectors including fisheries, nature conservation, shipping, waste reception and processing. Therefore it is vital that we make best use of our Island’s sea, maximising the social and economic value of our territorial waters, whilst working together with our environment’.

The ISC was incorporated on the Isle of Man in July 2018, with charitable status to assist users of the Irish Sea ecosystem in working together for its continuing health and productivity. The ISMF has pursued similar goals since 2012, specifically through Marine Planning, with its Secretariat in Liverpool University and a Steering Group drawn from all jurisdictions sharing the Irish Sea.

On October 23rd, the ISC took the ISMF visitors on a brief tour, beginning in Port Erin at the site of the former Marine Laboratory and visiting ISC premises, marine consultancies, and Oceanweb Marine IT and Communications. The tour continued with a wide-ranging discussion at DEFA, St John’s (on biological records, ecosystems, energy, fisheries, the Island’s nine new marine nature reserves, and other topics), a visit to the Manx Wildlife Trust in Peel and a look at Peel Marina.

‘The visitors were clearly impressed with what they saw and with the potential for further collaboration and mutual visits. This meeting was surely the first of many between the Irish Sea Centre and the Irish Sea Maritime Forum and their many partners who are working to keep the Irish Sea ecosystem healthy and productive. We look forward to future collaborations’.