Everyone has a business idea...what's yours? 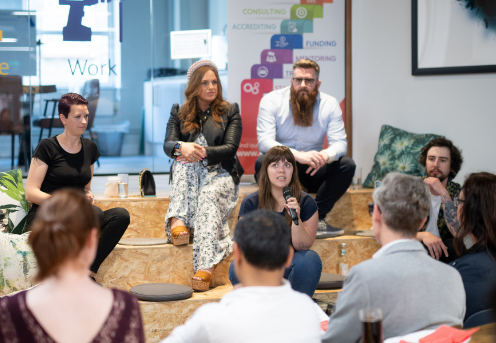 Enticed by the thought of pizza and the opportunity to network with some of the Island’s successful business owners, the latest Isle of Man Business Network event welcomed a room full of budding entrepreneurs on Tuesday 25th June. People of all ages, experiences and business expertise took their seats, notebooks at the ready, to hear the advice the five panellists had to say about starting a business on the Isle of Man.

The compare, Michael Josem, kicked conversations off by asking the panellists to explain their business concept to the audience and why they decided to become business owners. We were fortunate enough to be joined by Claire Christian – a fashion designer and retailer, Kim Graziano – a designer and illustrator, Mark Noble – fashion designer and retailer, Andy Skillen – a creative designer and Glyn Edge – a soap artisan. We soon learnt that these panellists saw a gap in the market on the Isle of Man for each of their trades. They developed their businesses looking for a better work-life balance, allowing them to work around their families, in fields of work in which they had prior experience, but most importantly developed from something they loved.

Whilst most panellists had previous connections to the Isle of Man, Kim Graziano – American designer - moved to the Isle of Man having never heard of it before. Accustomed to the dog eat dog environment the States had to offer, Kim was overwhelmed with the fact the Isle of Man Government offered financial support in the form of the Micro Business Grant Scheme when looking to launch her own business on the Island. Regardless, there was a united opinion that the Island offered them opportunities and freedom to explore and develop their business idea that they wouldn’t have had in London, or elsewhere.

Although all the panellists had work experience in their chosen business fields, starting a business was something new for a lot of them. For some, their business was built from the ground up. Andy, for example, quit his university degree and started his business with nothing in his bank account, having to borrow a laptop from a friend. Slowly but surely, job by job, Andy built up his business and resources by putting everything he earned back into his business. Now, he has multiple film suites to show for the success of his start up. For Andy, it was all about, ’making something out of nothing’.

Andy has been whisked off to different countries for business, and like a lot of the other panellists, has had the demand for his work to go further afield than the Island itself. However, the five panellists explained that they are content with the success of their business remaining on Island, and are not looking to expand and export at present. The Island offers them the perfect work/life balance. Frustratingly for Glyn, due to the nature of her work, exporting her soaps would encounter limitations from other governments due to the ingredients used.

Working on the Isle of Man is incredibly rewarding. A comment that was made by each of the five entrepreneurs was just how much emotional support and encouragement they received from the local community, in addition to the financial support and mentorship offered by the Micro Business Grant Scheme. Andy said that the advice and support giving by the Department for Enterprise was more valuable than the funding. Through the mentorship he learnt how to handle the financial side of running a business, of which he had no prior knowledge or experience. The panellists explained to the audience how the mentors supply ideas on how to grow and expand their network. Glyn said that her mentor provided her with a list of suggested clients – both Island-based and off Island; however, Kim advised all future business owners to network at every opportunity available in order to expand your client base and get your name known. Through the training offered by the Micro Business Grant Scheme, Kim met others going through the same process as her, and from this she made future clients for whom she now designs their website.

In order for your name and business to be recognised, Claire and Kim advised the audience to hold events. Claire has held fashion shows, whereas Kim holds a drawing club and performs live caricature. Kim advised everyone to ‘do something cool and word will travel.’ The two business women believed the Isle of Man to have a unique market and that due to its size and population, word travels fast.

The audience members asked for further advice on the sorts of advertising they found to be successful on the Island. Social media came out top, endorsed by every single member of the panel. Andy said, ‘the power of social media is not to be underestimated. It is the evolution of word of mouth.’ Nevertheless, it’s important to understand your audience. Glyn said that the nature of her work doesn’t allow for lots of innovative and regular social media posts, and instead hits the farmers markets for a hands-on approach to advertising. Likewise, newspaper adverts and radio jingles may not work for your core audience; Claire explained how she was fortunate enough to be offered some free space with the local press when she first started, but realised that her audience wasn’t there. Instead she focused on her social media channels and customer service.

In business, with the ups come the downs. The panellists shared the challenges they faced in starting their own business. Kim talked about the struggle of not knowing her income month to month, compared to the comfort of an annual salary. Ever the optimist, Kim said that it can also work in your favour: the harder you work the more money you earn. Claire and Mark spoke of cash flow and the importance of keeping some money to one side for the rainy days. For Glyn, the struggle comes from the need to switch between ‘work-head’ and ‘mum-head’, and usually just as you’re getting into the rhythm of one.

The night revealed that success is an arbitrary term for entrepreneurs. For Claire, success means every customer leaves happy, the reward is getting paid for it. Andy finds it rewarding when his clients become friends and considers himself successful due to the strong representation of his work in the Isle of Man – the cherry on top is doing what he loves to pay the bills. Working mum, Glyn, measures success through the business paying for itself and loves how her daughters show off her work to their friends. For Mark it is simply being able to pay himself a wage at the end of all the outgoings associated to running his business. Kim would say that her past self would consider herself successful, but that success is a moving target – she is always striving for better and for more.

The event was a success and was a true showcase of the benefits and struggles or running your own business, thanks to the ‘power of authenticity and honesty of the panel’. The Department for Enterprise looks forward to welcoming future applicants to the scheme. Everyone has a business idea. What’s yours?

Enquire now or visit our website for more information regarding our enterprise support schemes.